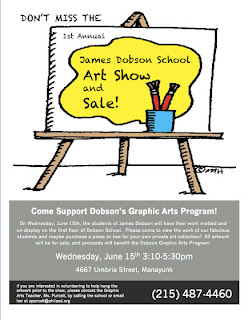 Dobson Family and Friends:  Please come out on June 15th to view the artwork of our dedicated Dobson Students.  They have worked really hard in Graphic Arts Class this year, and this is a celebration of their accomplishments!  The show is on Wednesday, June 15th from 3:10-5:30, on the first floor of James Dobson School.  We hope to see you there!
Posted by James Dobson School at 8:46 AM No comments:

Last week, Dobson School held its annual Olympic competition.  Each class divided into Red and Blue Teams competed in a wide variety of competitions, from the banana race, shoe relay, water balloon toss, and culminated in an 8th Grade tug of war! The staff even got in on the action, competing in two events of their own!  Hosted by our resident MC Ms. D and coordinated by Ms. Foulk, all participants had a wonderful day of friendly competition. 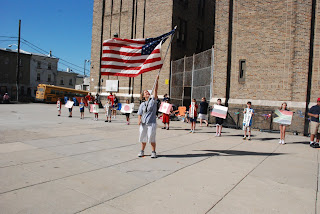 
THE FINAL EVENT OF THE DAY:

In the end... Blue came out victorious!
The 2011 Dobson Olympic Competitions came to a close with a dance party, and a water ice break sponsored by the James Dobson Home and School Association.
Posted by James Dobson School at 3:55 PM 3 comments:

JUNE IS EXCITING~
This week is jam-packed full of fun and wonderful things here at James Dobson School!  On Tuesday, June 7th,there will be an author’s tea at 9am in our library for our 1st and 8th grade students that participated in the buddy book project.  Also on Tuesday, after school from 3:30-6:30pm, our teachers will be serving water ice at Rita’s in the Ivy Ridge shopping plaza as a fundraiser for Dobson.  Come out and enjoy a water ice in support of Dobson! 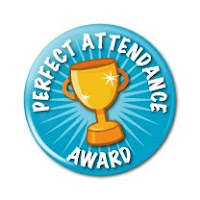 On Wednesday afternoon, June 8th, the members of the Principal’s Perfect Attendance Association will be taking their annual walk to Chloe’s water ice as their reward for perfect attendance during PSSA season.

On Thursday, June 9th , from 11:15am-2:30pm, our graduating 8th graders will be celebrated with a luncheon at Keenan’s Valley View Inn.

On Friday,  June 10th, from 11am-2pm, the entire school will be participating in Dobson Day, a carnival that is held in the schoolyard, and sponsored by Dobson’s fabulous Home and School. Students are eligible to fully participate in Dobson Day if they earn 20 SWEBS tickets with good behavior.  Parents are welcome and encouraged to come enjoy Dobson Day with us.

I can hardly wait for the following weeks of June. Stay tuned; there’s more fun ahead,  as we go along swimmingly through the final month of school.
Go Dobson Dolphins!
Patty Cruice,
Principal
Posted by James Dobson School at 5:36 AM No comments: